We develop customised solutions, adapted perfectly to your application and product, for any of your tasks. 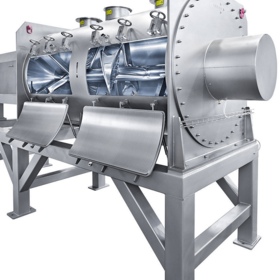 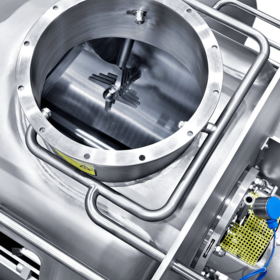 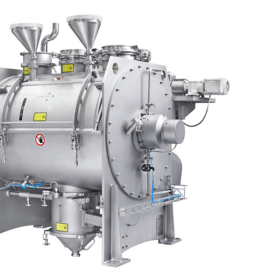 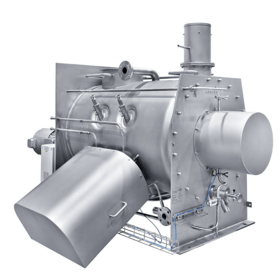 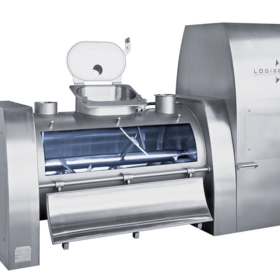 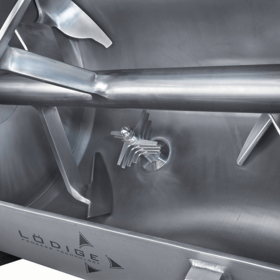 The Ploughshare® Mixer for batch operation uses the mixing and fluid process introduced to mixing technology by Lödige. High-quality mixes are achieved through equipment with tools which are adapted perfectly to the respective task.

For the sizes, please refer to the machine flyer.

Ploughshare® Shovels arranged on a shaft in a special system rotate as mixing elements in a horizontally fitted, cylindrical drum. The size, number, positioning, geometrical shape and the peripheral speed of the mixing tools are adapted to each other such that they cause a three-dimensional movement of the components. The turbulence generated in the mix through this process results in quick and precise mixing. All material is constantly gripped by the mixing tools to prevent dead zones or zones with poor movement in the mixing chamber.

Even components with extremely different bulk densities and structures can be mixed.

Special tasks may require additional support for the mixing effect of the mixing unit. This support is provided by separately driven, high-speed choppers, which break up agglomerated material and permit systematic granulation during the process in conjunction with the mixing tools.

Liquid components can be added into the product in motion by the means of diverse feeding systems. Pipes for large liquid quantity or nozzles for smaller quantity in general are used. Due to exact positioning, the wetting of the mixer wall and main mixing shaft is avoided as far as possible. Choppers support the distribution effect of the liquids.

A product is automatically granulated when liquids are added to products which turn sticky in contact with a liquid or if they contain binding agents. This granulation effect can be more or less pronounced.  Usually the bulk density of the product is increased as soon as it is subsequently dried. The particle size can be adjusted in a wide range depending on the product properties. The particle size can be increased too by addition of liquid or powder in a repeated manner. The use of choppers in such granulation processes can be of advantage. The liquid added is initially distributed in an effective manner, then the particle size is built up more homogeneously and finally the structure of each particle is more compact.

The intensive product movement enables the addition of liquid components to ensure coating of the particles. Molten fat for example can be preferably spread in a liquid form onto the particle surface in order to then recrystallize while cooling down. Cooling is performed in an effective manner by using liquid nitrogen or carbon dioxide snow which is added directly into the product. Further coating processes, like reaction coating, are deemed possible too.

Lödige Ploughshare® Mixers are used for different mixing tasks in practically all industries. We have delivered over 35,000 machines in 80 years. This is a small excerpt of our applications in the

We are there for you!

Of course you can also send us a general inquiry.
Please use this form:

You will be forwarded to the main page of Lödige

Do you want to save the selection for your next visit?

To the general start page without branch reference